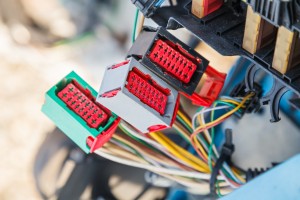 OEM integration is not a new idea; we have been using under-dash kits in hot rods and custom vehicles since the ’70s. The biggest obstacle to overcome was how to make the aftermarket head unit fit into the vehicle. Until the late ’80s, most vehicles used a “twin shaft” tape deck radio; for those who do not remember them, a twin-shaft radio used two knobs to control the radio for tuning in the radio stations and volume control. During this time, manufacturers had built some pretty good quality twin shaft radios with features like Dolby B and S. and auto advance fast forward for the ultimate luxury in tape deck solutions. This was developed to offer great features and integrate them into the OEM dashboard. Does this mean OEM integration has been around since the beginning?

To install a non-twin shaft radio in these vehicles usually requires cutting the dashboard. And then the under dash kit was born, but the under dash kit wasn’t very integrated into the vehicle. Then someone decided to mount the aftermarket radio in the glove box for a more sleek and integrated look but controlling the head unit became an issue.   Then came the Infrared Remote control; we all thought we had died and gone to heaven.

How important is OEM integration to customers? A whole industry of dash kits and antennas was created to support the demand: Metra, Scosche, and many companies sprouted up overnight. With no support from the automakers, each kit had to be essentially hand-built then mass-produced—an entire industry based on putting a radio in your vehicle. Music must be pretty important to us.

Things didn’t change much until 1997; the first car that required extensive modification to the dash and had integrated heater controls was the Ford Escort or “egg” radio. The radio and heater controls in one molded piece, as well as rear defrost controls. This installation included running two antenna cables from the passenger kick panel, running an amplifier harness to rear the vehicle, and installing the factory heater controls to the aftermarket installation kit. I also forgot to mention that the parts were roughly $150 plus labor before purchasing a head unit. This car was the first “you need these parts” to install a radio before installation professionals could use creative ways to accommodate customers’ requests.

During these early years of OEM integration, another device is still important today, the “high-level adaptor.” The high-level adaptor converts speaker outputs from the head unit to a useable signal an aftermarket amplifier can amplify. The biggest example of this and still today is adding a subwoofer system to a vehicle.   Adding an amplifier to your vehicle is one of the biggest upgrades to the audio system. Throughout the early ‘90s, most factory radios only had three to seven watts of output. At these wattages, a standard high-level adaptor would work perfectly.

The standard twenty dollars high-level adaptor doesn’t have the capability to handle higher power speaker inputs. This means the units will fail, but when? Usually, the person is on a long road trip with no access to a dealer for support. Companies Cache, Connection, and Audiocontrol have been addressing this issue in recent years. The high-level adaptors or OEM Interface Modules are made to handle up to 100 watts RMS. This is more than enough to convert any OEM signal for an amplifier; these units use a step-down transformer to reduce the factory wattage to a useable signal. These units also all use an internal heat sink to dissipate any heat created in this process. This is very important for the reliability and longevity of the aftermarket system.

In OEM Integration Part II, I will cover how to integrate with factory crossover and factory equalizers.