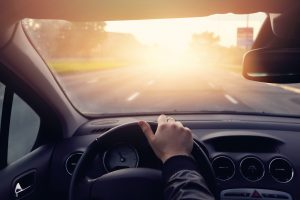 In last month’s column, I wrote about kick panel speaker mounting, which involves the (often) custom-placement of speaker drivers in the panel next to your feet, adjoining the throttle and brake pedals, as well as the mirror image panel on the passenger side, below the glove box.  Sadly, as pointed out, mounting speakers in this panel is a labor-intensive exercise, often requiring wiring harness removal/extension, reinforcement of the kick panel structure, and even in some cases, the fabrication of sealed enclosures.  Perhaps that’s why many have migrated away from kick panels, and have gone to the dashboard and a-pillars.  This article focusses on how to get started on your a-pillar speaker build.

The a-pillar is the trim panel that extends from the dashboard to the headliner on each side, adjoining the windshield.  It’s usually made of plastic, and in many cars covers small wiring harnesses, sunroof drain tubes, and even supplemental restraint system airbags in some models.  There’s often a good bit of space between the plastic a-pillar panel and the structural metal behind.  In fact, in several notable vehicles there’s an inch or more depth between the pillar plastic and the car’s metal structure.  Sounds like a great place to put small front stage speakers, right?

Before I go any further, if your car came equipped with a-pillar airbags, I would highly advise NOT installing speakers there, as whatever you attach to the pillar may prohibit the opening of the panel in a collision, or worse yet, cause what you’ve mounted to the pillar to become a dangerous projectile.  Research on line, or look through your vehicle owner’s manual to see if your vehicle came equipped with front-side curtain air bags in the a-pillars.  If it did, you might want to opt for the top of the door where many OEM’s now mount tweeters – I had to use this location in both of my BMW’s due to pillar-mounted air bags.  I’d suggest doing research first, like on-line or in print, verses physically prying off a panel to see if an airbag exists beneath (I respect airbags, having had a few deploy in my face in collisions – so I am really careful around them, so as to not ‘disturb’ them and risk an accidental deployment.  Plus, they’re expensive to replace!)

Now that we have established our ‘vehicular geography,’ take some time to determine an ideal location to mount the speakers (pillars, dash, top of the door panel).  I suspect the majority of systems installed will be of the three-way variety (midbass, midrange, and tweeter).  Very rarely will a two-way front stage be installed, simply because of the size of the midbass driver.  Going under the assumption that a three-way front stage will be installed, you’re obviously limited by not only physical diameter size constraints (you have to be able to safely see around your pods to drive your car), but also limited by airspace requirements for the speaker.  You’ll almost undoubtedly be installing a three-way kit with midbass mounted in the kick panel (ideal location), or door (less than ideal, but satisfactory).  In most systems, the midbass will cover tones from 250-400 Hz and down (with a highpass at 50-80 Hz to protect them from low subbass), with your ‘satellite’ speakers (midrange and tweeters) covering from 250-400 Hz and up, generally speaking.  One could argue the most important speaker for fitment in the three-way kit is the midbass.  It’s time to break out some physics, so stick with me:

Head-related transfer function (HRTF), interaural intensity differences (IID), and interaural time delay (ITD) all play a key role in the optimum placement location for your component speakers.  A sound wave approaching the eardrum is shaped by interactions with the size and shape of your head, torso, and outer ear, resulting in the HRTF.  More specifically, the HRTF is the ratio between the sound pressures of the wave at the eardrum, as compared to the sound pressure that would exist at the center of the head if the head were removed.

In general, the sound arriving at the ear further from the source is attenuated and delayed relative to the sound arriving at the ear closer to the source.  This generates an interaural intensity difference (IID) and an interaural time delay (ITD).  As a sound approaches the head, the ratio of distances from the speaker location to the near and far ears increases, and the effects of head-shadowing are amplified, causing the IID to increase.  The spectral shaping caused by the head and the shape of the outer ear may also change.  The ITD, which results from the absolute difference in path length from the source to the ears, remains approximately constant as distance decreases.  From this we learn:

These are generalizations, and are subject to the size and shape of one’s head and torso, and size and shape of the outer ear (the folds and ridges of the ear), but in general, the above is a good guideline for establishing ITD, IID and HRTF thresholds for the human auditory system.

When selecting a location for the midbass in a three-way kit, which we’ll likely cross over between 250 – 400 Hz (either actively or passively), an effect clearly dominated by ITD, the midbass driver should be placed as far forward as possible in the vehicle to optimize ITD (the only way around this is with digital signal processing, and even that is subject to its own suite of problems, which we’ll get into next time).  Lateral (forward to back) placement is much more important than horizontal placement (up and down).  This is because of the brain’s ability to process sounds such as spectral envelope cues, and use a phenomenon known as the “precedence effect.”  The brain can be easily “fooled” into thinking a sound stage is high with kick panel or floor-mounted speakers.

Right about now you should have a factory service manual open and a pry tool in your hand to see where to mount your midbass…door or kick panel?  Found your location?  Great, let’s move on!