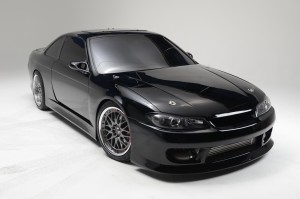 Black Betty is a car, a labor of “love” (and sometimes hate), spanning two decades of time, resources, and energy.  In 1995 I bought a brand-new Nissan 240SX and began modifying it for expert level competition. Many will remember this car because of all of its motorized gizmos, most notably including the world’s first motorized kick panels, the kick panels were attached on two axes to one-quarter scale servo motors with potentiometer feedback, so that a variety of different settings could be saved using the onboard computer and custom GUI (which incidentally controlled every aspect of the audio system). This car was competed successfully for seven years, including key wins at the Spring Break Nationals, Perry Southeastern Invitational Sound Challenge, and an IASCA World Championship at the 1998 Finals. Alas, sometimes you win, and sometimes you lose. At the 2002 IASCA Finals, the fifth-place finish prompted a maniacal multi-year build spanning 2002 through 2006 in its first iteration, and 2008 through 2010 in its second iteration; the second iteration affectionately coined “Black Betty” by good friend Bill Pleasant, as she was now cloaked in Sikkens Jet Black paint.  Entirely fitting in every way.  In total, more than 10,000 hours of labor was logged and more than one quarter million dollars invested to build the world’s finest show car, not just a car audio sound quality and installation quality vehicle.  No stone was left unturned – I even machined my own suspension bolts to ensure that a consistent type of hardware was used throughout the vehicle.  At the 2010 IASCA Finals, Black Betty became the highest-scoring sound quality competition vehicle of all time, in any format, in any part of the world (993.5 points). IASCA subsequently revised the rule book the year after, forever memorializing this score as the highest ever achieved in organized competition.

If it wasn’t for the 2002 Finals, and living with that fifth-place finish for eight full years, Black Betty would have never been built.  Remember how I was talking about grit?

So what do you do after posting the world’s highest SQI score? Build another car of course. Right about this time, IASCA announced the formation of a new single-seat sound quality class known as Expert Solo.  I was intrigued. I thought it might be an interesting prospect designing and building an “achievable” installation of around 140 hours in a daily driven street car. A vehicle that would retain its factory dashboard, door panels, and center console; the antithesis of Black Betty. I also wanted to purposely handicap the vehicle in an attempt to debunk some of the common car audio myths; no tweeters were used in the vehicle, opting instead for wide bandwidth midrange drivers, the use of 6 ½-inch subwoofers, and the use of full-range digital class amplifiers. I figured if I could win with a streetcar that had perceived handicaps in the choice of products and design, we could expose the benefits of a properly installed system with the right speakers and tuning. Mission accomplished. This vehicle went on to win four more IASCA championships, bringing my lifetime total to ten (10) IASCA championships, all in the expert class.

Why did I build Black Betty? Why did I continue to compete even after Black Betty had been forced into retirement by the IASCA rule change?  To win.  Besides the obvious reason of competition wins establishing instantaneous credibility, how do you know if you are the best if you never compete? And beyond that, I want to be absolutely sure that the products I produce within the walls of Hybrid Audio Technologies are the best they can be; having the best products is an attractive selling point to our customers, thereby completing a self-propagating process, a cycle of building, testing, winning and repeating.

As a brief postscript, as they say, old loves never die. I’m back on the road bike, now specializing in super long distance endurance events, where I compete against my most hated adversary, myself.

We are going to let our readers digest this article if you like to see more articles about the “Legends of Car Audio” please “like” our Facebook page or sign up for our newsletter and get instant updates directly in your Inbox at www.canadiancarstereo.com.